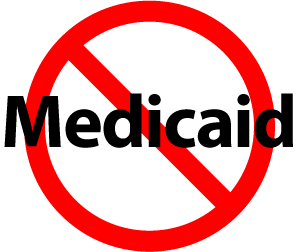 This story was produced in collaboration with The Philadelphia Inquirer. Physician’s assistant Ann Valdez checks out Amy Morales, 2, during a check-up at a community health center in Aurora, Colorado. The clinic serves many Medicaid patients (Photo by John Moore/Getty Images).

If you’re on Medicaid and looking for a new doctor, your chances are excellent of finding one … in Wyoming.

In New Jersey, not so much.

About 69 percent of doctors nationally accept new Medicaid patients, but the rate varies widely across the country, according to a study published Monday in the journal Health Affairs.

New Jersey had the nation’s lowest rate at 40 percent, while Wyoming had the highest, at 99 percent, according to a survey last year of doctors by the U.S. Centers for Disease Control and Prevention.

For years, some states have struggled to attract doctors to treat patients enrolled in the state-federal health insurance program for the poor, largely because of their low pay. New Jersey’s reimbursement rate for Medicaid doctors, compared to what Medicare pays, is the lowest in the nation, according to the study.

States estimated to be statistically significantly different from the national average are displayed in bold.

States estimated not to be statistically significantly different are displayed in italics.

Excludes cases where acceptance was blank or unknown. In comparison, more than 80 percent of doctors nationally accept new patients on Medicare, the program for seniors and the disabled, or those with private insurance, the Health Affairs study found.

Access to doctors looms as an important issue in 2014, when under the federal health law, the number of Medicaid patients — now 60 million — will increase by as many as 16 million, including about 200,000 more people in New Jersey.

The Medicaid expansion is optional for states under the recent Supreme Court ruling on the law, and New Jersey Gov. Chris Christie said he is leaning against it. States have more than a year to decide.

To boost doctor participation, the health law increases pay for primary care physicians in 2013 and 2014 who treat Medicaid patients — a 30-percent hike on average nationally and a 50-percent boost for New Jersey doctors. After that, Congress is likely to come under pressure to continue the funding, but there is no guarantee it will.

Robert Maro Jr., a Cherry Hill, N.J. internist, said he has not accepted new Medicaid patients for 15 years because of low pay. He notes the state reimburses him only about $23.50 for a basic office visit, less than half of what he gets from Medicare or private insurers.

Maro said he treats Medicaid patients in the hospital and in nursing homes, but he would lose money treating them in the office where his administrative costs are higher. He said he would start seeing new Medicaid patients only if knew the pay hike under the health law would continue beyond 2014. Otherwise, he worries he would take on new patients only to see rates fall back to the old levels in 2015, and then he would be required legally and ethically to keep treating them.

“That would be a nightmare,” he said.

Study author Sandra Decker, an economist at the CDC, said the impact of the law’s twoyear

pay boost may be limited because of its short duration. She said she knows of no states that have expanded efforts to recruit Medicaid doctors, although the pay raise is slated to take effect in less than five months.

Doctors also cite administrative hassles and delays in getting paid as reasons why they don’t accept Medicaid patients, according to the Center for Studying Health System Change, a Washington nonprofit.

New Jersey Medicaid officials acknowledge the lack of physician participation is a problem, but said the recent move to enroll nearly all Medicaid recipients into private managed care plans “should reverse the trend,” said Nicole Brossoie, spokeswoman for the New Jersey Department of Human Services which oversees Medicaid.

Many states have contracted with private managed care companies for the care of Medicaid patients to cut costs and improve care. Brossoie said those companies can pay higher rates to doctors to get them to join their networks, and the state holds the firms accountable for making sure members have access to providers.

Physicians’ participation in Medicaid is an important barometer of patients’ access to care, but not the only one since patients also get care at community health centers and from non-physician providers such as nurse practitioners, said Stephen Zuckerman, senior fellow at the Urban Institute.

Why Read This Article:

This is another must-read article not written by me. At the same time as Obamacare gave “free” Medicaid insurance to millions of Americans, there are fewer doctors to care for them. How is that good for our health?