As you can see from the previous table, Obamacare delivered the opposite of what it promised. It made our sick Healthcare System even sicker, not better.

Four recent presidents, along with multiple Congresses, both Republican and Democrat, have all used the same, frankly ludicrous approach to our sick healthcare system. It's what you might call “Trust Me!”

Next Page: Fixes that Fail: "Repeal and Replace"

The Republicans have tried to repeal Obamacare more than fifty times, all without success, yet they asked us to trust them. Why should we?

According to official projection by the CBO, the Medicare Trust will run out of money by 2029. Within ten years, Medicare will be broke and seniors will simply not get the care they need.

By what twisted logic do some people want to expand a Medicare program that is about to collapse? So, then ALL Americans will be denied care?!?

And why are both Medicare and Medicaid going broke? Because they are spending more money (on Washington’s healthcare bureaucracy and the increasing regulatory burden) than they are taking in.

Combined spending on our three major entitlements — Social Security, Medicare and Medicaid — amounted to 8.4% of GDP in 2007, or about $1.1 trillion. Under the Congressional Budget Office's extended baseline, the three programs will claim 25% of GDP by 2082, or almost triple their present share. Will there be money left for anything else? 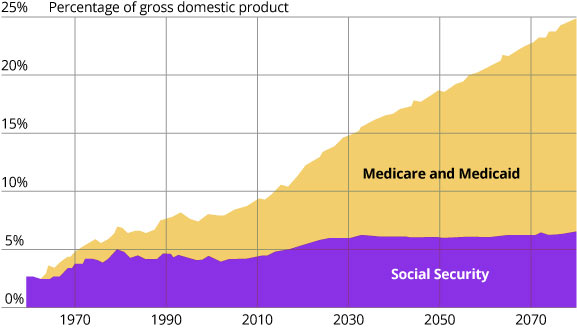 Because Medicaid is spending more than it can afford, just like Medicare, it must cut its costs. So, Medicaid programs reduced payments to doctors. Fewer doctors are thus available to see more and more patients. Wait times to see a doctor or to get care have gotten worse. Just ask an American veteran waiting forever for what they need.

In June 2018, The Dallas Morning News published a five-part exposé of the ways that Texas Medicaid was failing medically vulnerable Texans: sham panels, bad outcomes, waste and fraud, and a bureaucracy that employs more than 60,000 people, none of whom ever touch a patient. Texas Medical Association lists 10,000 fewer doctors than the bureaucrats in Texas Health and Human Services Commission.

EMTALA is a good example of how politicians meaning well can do great harm to patients. EMTALA was passed to prevent hospital Emergency Rooms from transferring out patients who had no health insurance. Hence its nickname, the "anti-dumping law."

The EMTALA law requires a hospital to provide whatever care is needed to stabilize a patient regardless of whether the patient has insurance or not. This means the patient who it is having a heart attack will get whatever surgery, ICU stay, medications, and doctors’ services the patient’s medical condition warrants. The hospital must provide that care despite not being paid.

As a consequence of EMTALA, Washington created the unfunded mandate — that you and I pay every day without knowing it. Want to know why an aspirin costs $2/pill when you’re in the hospital? The reason is the unfunded mandate: hospitals shift the un-reimbursed costs of caring for the uninsured onto the shoulders of those who have insurance. Otherwise, the hospital goes out of business.

The unfunded mandate annually costs my former medical center 25 percent of the total annual operating budget. This means our hospital must “find” a quarter of a billion dollars every year or it won’t cover its nursing payroll.

HIPAA stands for Health Insurance Portability and Accountability Act of 1996. It was supposed to solve the problem of people losing their employer-supported health insurance when they lose their jobs. It did not fix the problem but it did elevate security of medical information to a level where doctors cannot communicate with each other. In other words, another of Washington’s “Trust me”  plans was not only a fix-that-failed, but it actually backfired.

No Trust in Washington:

Americans DON’T TRUST WASHINGTON and haven’t for a long time. Since Obama took office, Congressional job approval has been consistently below 20 percent, meaning more than 80 percent of We The People don’t trust Congress to get things right.

Do you approve or disapprove of the way Congress is handling its job? Note: Gallup did not measure congressional job approval in 1984/85.

Get the
new book:

"Curing the Cancer in U.S. Healthcare"

Dr. Waldman's new
eye-opening book lays bare the disaster that has befallen both patients and doctors over the last 50 years due to government and administrative involvement into health care. Today close to 50% of healthcare spending goes NOT to doctors to pay for care, but to administrators who manage the miles of red tape introduced by ever increasing number of government regulations.

Dr. Deane Waldman was Chief of Pediatric Cardiology at: The Children’s Hospital of San Diego, The University of Chicago, and The University of New Mexico. He has seen the insides and outside of our floundering medical care systems. At present, Dr. Waldman is Distinguished Senior Fellow for Healthcare Policy at Texas Public Policy Foundation. His proposal for StatesCare has the potential to revolutionize healthcare in the U.S. and save us from the imminent imminent collapse.